What is the difference between Mobile Data and WiFi? 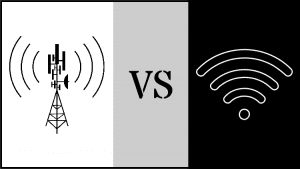 As a prepaid wireless company, we often get the questions about the difference between mobile data and WiFi. We’ll discuss the distinctions below. After evaluating the pros and cons, you can decide which type of data access is best for your needs.

What is Mobile Data?

Mobile Data uses your device’s built-in cellular antenna to transmit and receive data through cellular service. This allows smartphones to connect to the internet, even when they aren’t around WiFi internet service. Ok, but what does that actually mean? Mobile data access and experience will depend on several factors:  your cellular coverage, network congestion, and the speed and amount of mobile data available on your plan. If you want to save data on your monthly cell phone plan, there are many ways to do that as well – saving you money at the same time.

Depending on your carrier, your coverage may vary a lot. This is because cellular mobile data is carried by the cellular signal from your local tower. Many things in the area will affect that signal. Trees, tall buildings, and other landscape variables can absorb or deflect the transmitted signal. This will change the amount and strength of your mobile data signal.

During certain times of the day, your local tower may receive much more traffic. This is usually due to scheduled shifts like the end of the school day, sporting events, and people gathering for holidays. When the network experiences a surge in traffic, everyone using the same tower (or cell) merges into the same queue for data. Typically data speed slows across the board in such cases.

The Speed of Your Cell Phone Data Plan

Many carriers today use throttling to cut down on network load. Usually, the specifics can be found buried deep in your cellular service agreement. (In case you’re wondering, Best Cellular does not throttle Mobile Data on any of our plans, but we do not offer streaming data services.) This may be a set data speed limit right out of the gate, or it could be reduced after a certain amount of data is used. Be sure to ask whether your data is throttled before signing on to a plan that sounds “too good to be true!”

Amount of Mobile Data on Your Plan

When cellular providers set up their plans, they will go for one of two options. These are throttling and data caps. As we mentioned, throttling means that your mobile data speed will be limited either from the start or after a certain amount of data usage has been reached. Data caps are limits on the amount of data available on a given plan. However, although many carriers advertise “unlimited data” plans, no such thing truly exists. They will always have a behind-the-scenes data cap for customers who decide to abuse the system. Also note, due to the recent repeal of the Net Neutrality agreement, ISPs and cellular service carriers have much more say in how they provide data to the end user. Again, always double-check the fine print before signing any contracts or leasing agreements.

As of 2018, cellular providers in the US are still using 3G, 4G, and LTE for mobile data transmission. These are the third, fourth, and next-gen versions of the cellular technology, respectively. 3G speeds and coverage range are far outpaced by the 4th-gen tech, particularly on a service like Best Cellular CDMA. (The company providing the LTE signal bought up all of the leftover bandwidth available after the switch from analog to digital television broadcasts. Remember those days?) Depending on your phone’s antenna and your carrier’s tech, you may have access to the faster data speed and range.

Wi-Fi is an abbreviation for “wireless fidelity.” Although this sounds fancy, it’s really a play on the old-fashioned term “Hi-Fi” which referenced stereo system audio quality. It has nothing to do with the technology of wireless data transmission. The Wi-Fi Alliance approves devices which are fully WiFi compatible with a “WiFi Certified” logo. Just like mobile data, there are also multiple variables to keep in mind with this technology.

Much like mobile data, the strength and distance of a Wi-Fi signal diminish based on surroundings. A wireless router, which transmits the WiFi signal, typically broadcasts throughout personal homes or businesses. Stronger antennae are available but usage is not as common. The signal itself will carry through walls, but distance drops off in comparison to cellular data. However, if you are in range the coverage is excellent.

The only time wireless connection suffers is when there are many devices using the same router at once. Since the wireless routers are converting a landline internet connection, they can be extremely reliable.

WiFi is normally much faster than mobile data. The only speed bottleneck will be the amount of bandwidth available on the landline internet connection. Thankfully, most of these connections are broadband or even fiber technology so they are blazing fast.

Amount of Data on WiFi

A landline internet connection typically does not have data caps. Customers using them via WiFi don’t need to worry about overages, even on a cellphone or tablet.

What is a Mobile Hotspot?

A Mobile Hotspot (or a phone acting as a hotspot) uses cellular data to transmit mobile data as a Wi-Fi signal. Laptops, tablets, TVs and other internet-enabled devices can connect easily. Hotspot devices can serve useful for travelers, but keep in mind that all of the restrictions mentioned for mobile data above still apply. A mobile hotspot converts mobile data from the cellular carrier into a local WiFi signal. Since this splits the bandwidth between multiple devices, many carriers either do not allow hotspot capability or charge an extra fee for usage.

Data vs. WiFi – What is better?

When comparing the choices of Data vs WiFi one of the most obvious things to mention is value. Data plans from your cellular carrier give you a set amount of data (or “unlimited” and throttled mobile data) while for the same price or cheaper you can get a WiFi connection. Additionally, many restaurants and retail shops now offer WiFi for free! Most of the time, WiFi is cheaper, more reliable, and faster for anything you need to do online. The only major benefit to Mobile Data is portability for access in areas without a landline internet connection.

3.9/5 (9 Reviews)
Share "What is the difference between Mobile Data and WiFi?"

What is the difference between Mobile Data and WiFi?